What is The Best FPV Drone Frame for Sport & Filming

"FPV (First Person View)" is operated while watching the video transmitted from the drone to the smartphone or HMD (head mounted display). It is possible to enjoy a realistic first-person perspective. Since you can check the flight status in real time, it is also useful in scenes where more accurate flight is required. Especially in drone racing, it is necessary to operate with FPV, so it is a recommended function for those who are considering participating in drone racing.

As drone races are held every day, many people are starting to race drones. Here, we will talk about "frame selection," which is the core of a drone for racing.

What is required of building a racing droneframe? There are various things such as "speed", "agility", "durability", "weight / payload", etc. The frame has the role of mounting various parts such as propellers and motors, but it is not enough to just put them on, "size, weight, material", "impact absorption in case of a crash", "assuming the placement of various parts", "airframe". It is normal to consider each frame such as "center of gravity and aerodynamics". 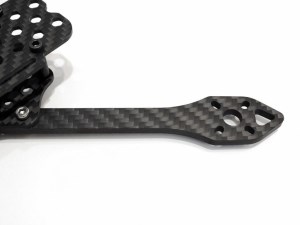 Drone production is generally achieved by mounting parts on the airframe frame. As for the frame, the one made of carbon is strong and lightweight, so we think it is better to choose the one made of carbon fiber as much as possible. Since carbon material has conductivity that allows electricity to flow, be careful not to cause a short circuit during manufacturing.There are many carbon frames as the material, but for example, the weight and durability will change completely depending on whether the thickness of the bottom frame is 3 mm or 4 mm.

Previously, 250 size (diagonal motor spacing was 250 mm) was the mainstream for FPV racing drones, but recently, small frames are often used from the viewpoint of further agility, and the mainstream in racing is also 210. Moving to size. The 210 size aircraft can comfortably use the 5 inch propellers most often used in racing. The X type, which has the minimum size of the main body of the aircraft, is also popular with racers, but the space for mounting parts will be quite tight, so I think it is better to avoid it as the first aircraft.

In addition, the aim is to improve maintainability by making it easier to remove the four legs of the quadcopter, and there are various things such as raising or lowering the position of the center of gravity. 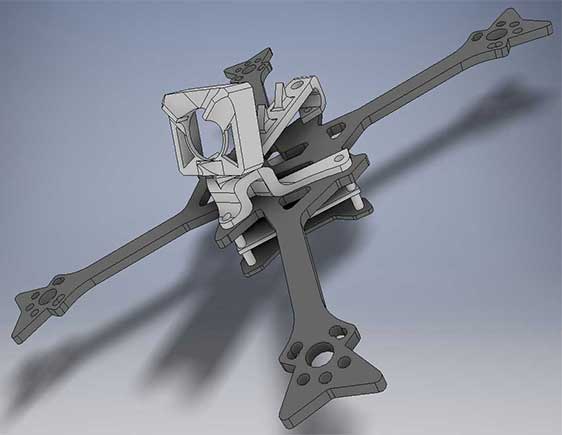 As long as the flight controller and motor can be arranged horizontally and evenly, you can fly any shape of the aircraft frame, so you can create your own original frame. It's a little heavier, but some people use aircraft frames created with 3D printers.But which is the best frame for a racing drone after all? There are various types of racing drone frames. What's good after all?

The shape of the frame is roughly divided:

As you can see from the shape, the X frame is clearly simpler and lighter. Light weight is a very advantageous condition for flying drones.

The kinetic performance of the drone changes depending on whether the battery is positioned up or down.The top and bottom are well-balanced with the propeller as the boundary, and the one with the weight concentrated in the center (called the concentration of mass) can move more quickly.

You may want to put the battery down because it moves smoothly, but that should be done in the flight controller settings. Lowering the PID value will make it smoother.Also, stacking it on top makes it harder for beginners to destroy the battery.Conversely, advanced users are more likely to destroy the battery.For advanced players, it ’s almost because the drone flies 90 ° (upward facing forward).

③ About ease of assembly

Which Is the Best FPV Racing Drone Frame?

After all, at the moment, when it comes to the top racer class, it seems that it doesn't really matter whether you are physically agile if you have power and sense.To think physically, but the lightness of the aircraft, air resistance and resistance to breakageare also important.

lFor beginners, the HX frame is good because it is easy to place parts and it is hard for beginners to destroy the battery.

The difficulty of breaking is directly related to the amount of practice. First of all, it is most important to be able to practice a lot. It doesn't matter if you are a professional or a rich person who can make as many finished products as you want.

Next: What Is The Differences Between Carbon Fiber T700 and T1000 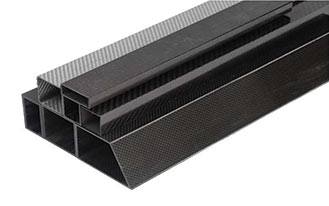 Do you care carbon fiber square tubes appearance or strength 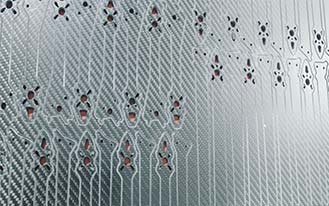